Currency market volatility is often associated with macroeconomic events, cyclical trends, and structural developments, but over recent years political uncertainty has become a key driver of currency sentiment. The British Pound, the world’s oldest currency still in use, has been tormented by a prime example of this modern political risk: Brexit.

When the UK voted to leave the EU in 2016, the British Pound suffered its biggest one-day fall on record - sliding 8% against the US Dollar. A record 13% intraday range for the pound was logged on this day, dwarfing the previous record of 6.5% during the height of the financial crisis in 20081 . The provocative subject of Brexit continues to influence sterling’s value, which is today approximately 11% lower on average against G10 currencies compared to pre-referendum levels. 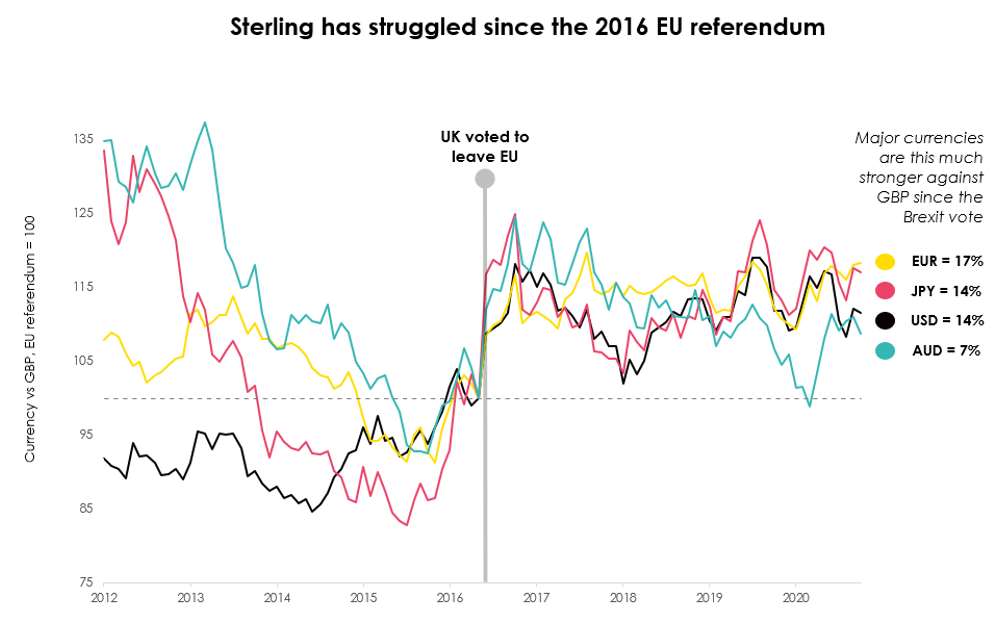 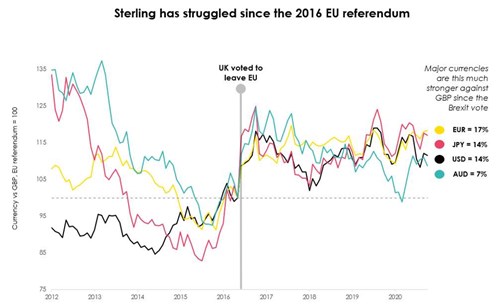 Since the historic vote, the pound has been plagued by the uncertain future of UK-EU relations. During negotiations, the pound has dropped below $1.20 versus the US Dollar several times, subsequently recording new 35-year lows. The negative attitude towards sterling is highlighted by data from the Commodity Futures Trading Commission (CFTC), which shows traders have been “short GBP” for 219 out of 279 weeks since the referendum. In laymen’s terms, speculative traders have held a pessimistic view of sterling’s future valuation for nearly 80% of the time in the post-referendum period.

If a free trade agreement is not secured before year-end, the UK and EU default onto World Trade Organisation terms, resulting in tariffs and other barriers to trade. Given the UK is still recovering from its deepest economic contraction in more than 300 years as a result of the global pandemic, the Bank of England is expected to provide further stimulus in the form of quantitative easing and possibly negative interest rates to cushion the blow of a no-trade-deal scenario. However, increased trade frictions and the likely negative reaction from financial markets in this scenario, are expected to more than offset looser policy settings. Recent research by Oxford Economics2 finds that UK GDP will be 1% lower by the end of 2022 in a no-trade-deal scenario, compared to its baseline forecast, which assumes an FTA is established. Furthermore, a no-trade-deal would reduce the level of UK GDP by 3.9% over the longer-term, which is almost double the 2% long-term damage estimated to be caused by the pandemic.

An FTA is pivotal because the EU is the UK’s biggest trade destination, accounting for almost 50% of the UK’s total trade in goods and services in 20193. However, even if an FTA is agreed, trade between the UK and EU will be subject to new customs and regulatory bureaucracy. Furthermore, leaving the EU has sharpened the focus on the UK’s problematic current account and budget deficits. A widening current account deficit should be matched by equally large capital inflows from abroad4, but the unravelling of the symbiotic relationship between the UK and the EU may impact Britain’s ability to entice foreign investors. Building trade deals globally is a significant benefit of Brexit but the UK may find it more challenging since the government’s recent willingness to break international law via its Internal Market Bill, which overrides parts of the Brexit treaty.

The trajectory of the pound depends on the next major move in the game of Brexit chess and large currency swings are forecast based on deal or no-deal scenarios. Failing to agree a trade deal could send sterling towards $1.15 and €1.00 against the US Dollar and Euro respectively and because most of the UK’s international trade is carried out with the US and EU, this would create additional pressures for British importers.

Conversely, if a deal is reached before year-end, this will boost confidence in UK assets in the short term and sterling could climb to $1.35 and €1.15 versus the US Dollar and Euro respectively. But any deal is likely to involve risks and compromises for both sides and the UK especially will have a sword of Damocles hanging over its economy, which might discourage investment. A common fallacy is that the dust will settle if a deal is struck, but in truth, it simply marks the start of a structural change in UK global trade relations and could keep the pound ultra-sensitive to global risk sentiment.

How can companies respond?

If your company requires support with Brexit response planning, then don’t hesitate to contact our solutions experts to see how we help up to 60,000 individuals and business clients worldwide, across different sectors, with currency insights and solutions.

3The Office for National Statistics – https://www.ons.gov.uk/economy/nationalaccounts/balanceofpayments/bulletins/uktrade/december2019

4The Office for National Statistics