Indulge me and let me tell you about my business TINKER TAYLOR Video Content Agency and COVID-19. In 24 hours all our scheduled filming was cancelled. Every single project.

48 hours later all our staff had taken their computers and hard drives and were working from home. There was still, thankfully, work to be done as we finished off the delivery of several projects already in production, but then what? There were two options as I saw it. Give up or fight on. I know only one way.

We looked at our client list and tried to envisage what problems this pandemic would pose for the businesses we worked with.

An immediate issue for our Higher Education clients was that student open days scheduled for March and April 2020 would be cancelled.

So how did they plan to recruit students for next year’s intake, when one of their biggest recruitment events was cancelled? The answer, unsurprisingly, was to take the Open Days online.

University College Birmingham responded very quickly. We got a crew onto campus for the last two days it remained open and filmed 20 academics talking about their specific courses and schools.

Fast turnaround with no compromise on high production values. We delivered on time and on budget and the videos were brilliantly received.

When we called Wolverhampton University, they had already sent their staff home, so we pitched to do a series of interviews with their academics, via Skype. I would go to the studio and set up our two Sony FS7 cameras, one pointing at me as interviewer asking questions and the other pointing over my shoulder at the screen, where we would see the interviewee. In addition we would record the screen as a Quick Time movie, so in essence it is a three camera shoot. I would record my sound on a radio mic and record the Skype call on a radio mic too. All bases covered. Wolverhampton University said yes.

It was a strange experience for sure and there were all sorts of challenges to overcome, as the academics were all at home and each setup was different. 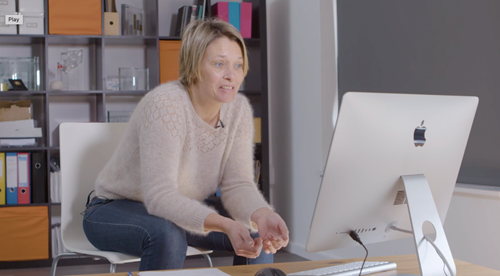 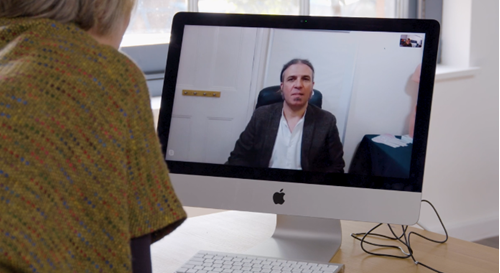 First, we needed to ensure that the interviewee was visible! We needed to move people away from windows (which is where most naturally put their office desks) so they were not bleached out by the bright sunlight or backlit and looking like a person who was trying to hide their identity on Crimewatch! Blinds and curtains were opened and closed, lights switched on and off and sometimes repositioned, laptop screens were adjusted for framing, personal effects removed from the background, until we were happy.

Second, we needed to hear our interviewees. Skype naturally sets the audio level to the maximum, so that needed to be adjusted down, as did the output level on their computers, so I couldn’t hear my voice at their end. Some people had super smart headsets, which frustratingly caused feedback at our end, so needed to be removed. 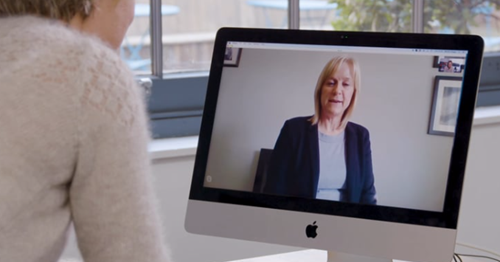 The quality of the Skype call depended on the quality of the computer the academic had and the connection at their end. We asked everyone to turn off all other devices connected to the internet in the house. With homes full of school children and partners also working from home, that request was not always welcomed! However it made a significant difference to the technical quality of the call, so all obliged. 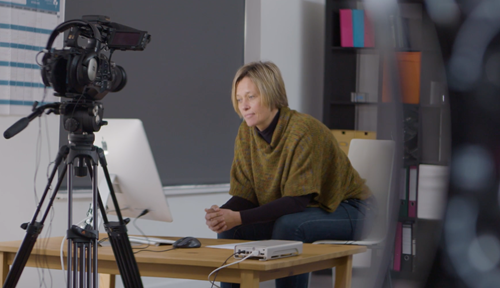 People’s homes are not what one would describe as a ‘closed set’. Then there were errant cats, children and husbands wandering in and out to deal with! One conscientious gentleman set up a blue screen studio in his house, only to have the blue background he had so carefully stuck up start peeling off mid interview! 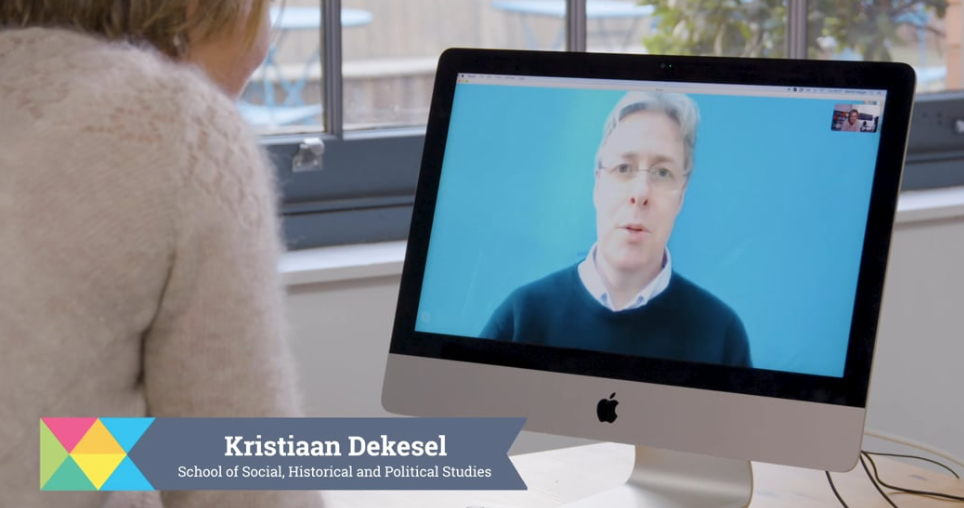 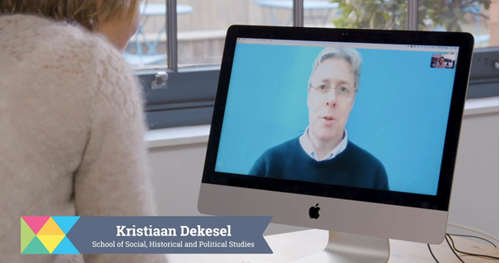 These comedic moments actually really helped relax our interviewees, several of whom had not done anything like this before and were a little nervous. The UK’s broadband network is under tremendous pressure, so even after switching off all other devices, in many cases there were still technical glitches. The balance had to be struck between asking our interviewees to repeat answers to questions and breaking the relaxed flow of the interview – and letting it go. Our fabulous Editor Rob did a brilliant job of re-syncing the audio 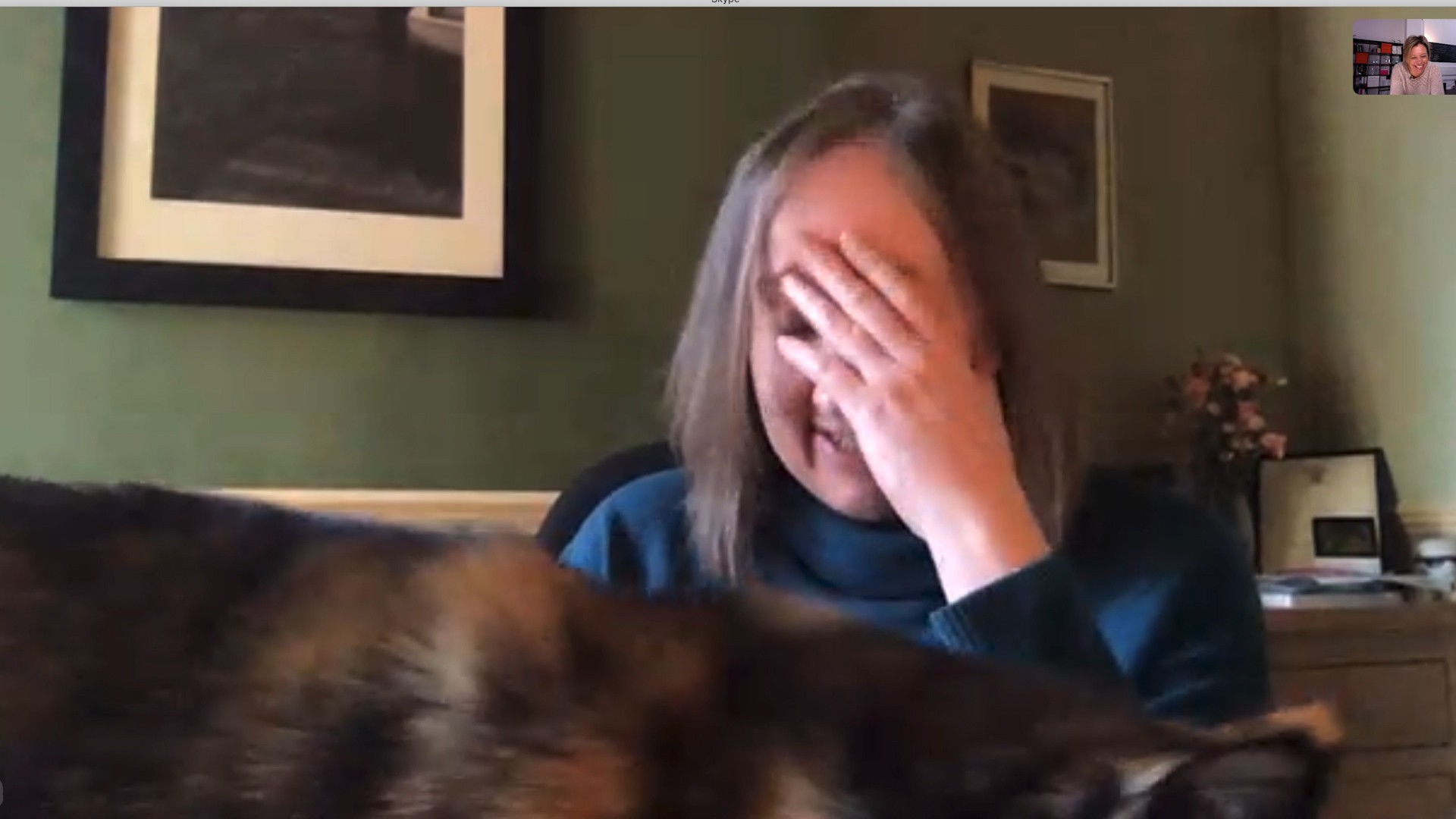 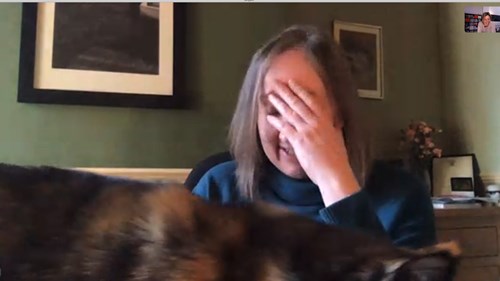 to the picture and cutting away to different shots to mask difficult audio edits.

What resulted was a series of 16 videos which I am very proud of. Are they technically perfect? No. Does that matter? Not one bit, as these videos are illustrating to students that whatever life throws at you, Wolverhampton University will be there to support you in whatever way it can.

The production of these videos at this difficult time, tells me, as a prospective student, all I need to know about the Universities core values and the proactive, positive and passionate attitude of the people who would be teaching me. What’s not to love?!

Communicating to your staff, your clients, your investors, during these challenging times is critically important. Video communication where you can see your interviewee’s face is so much more powerful than a written message. You can see how the person delivering the message is feeling. You can see the positivity, compassion, enthusiasm, whatever is required. It makes people feel valued and reassured. It stops miscommunication.

Whilst the majority of the Tinker Taylor team are working from home, as of today our Creative Director, Sam Taylor is still able to offer Skype video interviews from our studio, whilst adhering to all social distancing protocols.