Neurodiversity: What is it and why is it important?

If you don’t know what the above symbol means, you aren’t alone.

But you really do need to. This is why:

The term ‘Neurodiversity’ is one that’s been around since the mid-1990s when an Australian Sociologist coined the term to explain how her daughter’s brain and indeed her own brain differed from the prescribed societal norm.

Since that point it’s become a catch all term, used by anyone with a Neurological condition that alters the way a person processes and uses information, the way they process sensory input or indeed the way someone’s ability to function is affected through injury, illness and other factors that mean their brains work differently.

The truth is that if you ask most people what neurodiversity means they’d commonly say something like ‘Oh that’s all about Autism isn’t it?’

Yet, the answer is much broader.

As an adult diagnosed with ADHD, Autism and Dyslexia, all after the age of 45 (I’m now 48) and with 14 years of passionate study, research, and work with thousands of Neurodivergent people I feel that my saying ‘it’s not just about Autism’ is justified.

However, if you still don’t know what the symbol includes let me elaborate.

I am a Neurodiversity awareness consultant, trainer, professional advocate, a committee member of two national charities and a speaker on the subject. So, let me tell you what Neurodiversity is and isn’t.

Look at the image below: 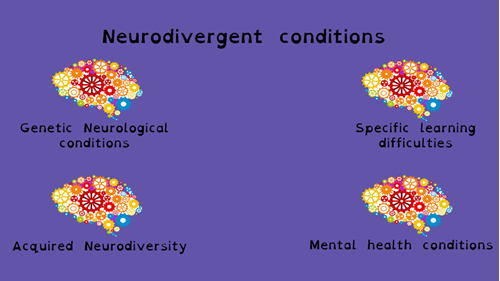 What it shows you is how I categorise Neurodivergent conditions. The four groups you see include a range of conditions though, so let me give you a few of examples from each.

Just looking at those conditions alone will let you see that the term Neurodivergent is much broader than most people understand at first.

That’s why, it’s important to recognise that these terms, Neurodiversity and Neurodivergent, can and do include lots of conditions and in turn those conditions can affect people who live with them in many different ways.

It’s complex, wide reaching and affects one in every seven people in some way.

So, it’s not just ‘a few people’ but many. It’s not just something that affects children or younger people either, in fact the largest age group being diagnosed with Autism and ADHD after children is adults aged 25 and all the way to 80+

What’s the financial impact of not understanding this on your business?

Figures for 2019 – 2020 showed that in total 38.8 million days were taken off sick by people employed in jobs. 32.5 million of these were reported as workplace illness, 30.2 million were reported as being due to stress, anxiety and depression.

Of those, 20 per cent were taken by Neurodivergent people (either clinically diagnosed or not, due to waiting times for assessment) who felt bullied, marginalised, overlooked for promotion, or considered less than others because of their Neurodivergent conditions.

That's a total of 6.45 million sick days taken by Neurodivergent people that could all have been avoided, simply with better employer awareness, understanding and training.

The financial impact to any business could be huge.

How bad can it get?

Simply put, those who feel the most unsupported can end up suicidal. The two reports below focus on Autism and ADHD only:

10% of all UK suicides were people with undiagnosed Autism

Frightening numbers of people reach the point where life feels too difficult, to stacked against them and to unaware of their needs. Leading to huge numbers of either people taking their own life or living in a suicidal state.

What can your business do about this?

Investing in different levels of Neurodiversity awareness training for your staff is a great first step. For general awareness it’s widely regarded by the Neurodivergent education community that a short form training course is as effective as anything else.

They make people feel more able to have useful, honest conversations with Neurodivergent colleagues who may need some extra support. Understanding of the terminology and words used and the common ways that different conditions can affect different people. But without diving any deeper.

The benefit being that those same Neurodivergent colleagues will then feel more able to discuss potential reasonable adjustments that they may require in the workplace.

For organisations that want to delve deeper into this topic it’s recommended that a full, department by department business audit is invested in, so that they can gain deeper understanding of the ways that Neurodiversity can impact every aspect of the business. From employees to clients and visitors to premises.

It’s also worth remembering that given that for most businesses, the first interaction they may have with clients is online, via a website, that Neurodiversity awareness and appropriate adjustments must start there.

What’s the likely costs of making the types of reasonable adjustments that your business may need to or be expected to make?

Well, according to a study in 2019 it may surprise you to learn that over 80 per cent of reasonable adjustments are free or less that £100.

So, if the investment in training and adjustments was for example, less than the costs of covering days off sick, recruitment of temporary staff or training new staff should someone feel unable to continue working, that would for most businesses seem like good financial sense.

This simply means that the investment in awareness training and the reasonable adjustments that may be required could be the best investment in reducing potentially unnecessary costs that a business could take.

Along with the other considerations of Diversity and Inclusion (D&I) this can seem too much work.

Often what’s not realised is that Neurodivergent conditions cross over into every other area of the D&I equation.

Someone could be Neurodivergent, a person of colour, bisexual, of a particular faith and physically impaired.

Ignoring Neurodiversity is simply not an option for any organisation who has a diversity and inclusion policy in place.

Whilst it’s true people end up displaying what are labelled as mental health conditions assuming that because your business had invested in Mental Health First Aid (MHFA) aren’t equipped to help. Remember:

By the time a Neurodivergent person displays Mental Health difficulties it’s already a long-term problem of lack of support, awareness and understanding.

I recently spoke to a senior MHFA trainer who told me that MHFA training doesn’t and can’t include specific Neurodiversity information as it’s not part of the course or something that they have enough information about.

If you haven’t yet invested in Neurodiversity awareness training, it is something that must be addressed.

During the Covid Pandemic there has been the biggest increase of adults seeking assessment and diagnosis for Neurodivergent conditions than ever in the last 20 years. The majority being assessments for Autism, ADHD and comorbid conditions.

It’s now widely accepted that due to the lengthy waiting times for NHS assessments and the costs of private diagnosis, that people who identify as self-diagnosed have as much right to ask for reasonable adjustments as those with clinical diagnoses.

However, those same people are now reassessing whether their employers are doing all they can to support them, to help them to grow and to progress. The question is: Can you say that your business is doing that?

This article was written by Matt Gupwell of Think Neurodiversity. Matt has 14 years of experience working with Neurodivergent people of all ages as well as being a parent to two sons with Autism and ADHD. He’s also diagnosed with ADHD, Autism and has Dyslexia so has 48 years of lived experience, 45 of which were undiagnosed.

Matt is also available as a speaker on the topic.

To celebrate this, Matt is offering Chambers members a five per cent discount on training packages or speaking fees.