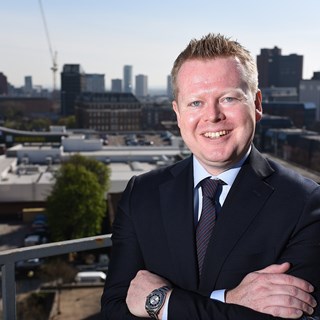 Andy Street claimed the Tories need only a four per cent swing in their favour to win the West Midlands Combined Authority mayoral elections next year when he launched his campaign at the opening day of the Conservative Party conference at the ICC in Birmingham yesterday.

The former chair of the Greater Birmingham and Solihull Local Enterprise Partnership set out his campaign priorities around transport, skills, housing and jobs and challenged his opponents to debate with him.

Mr Street, who will now step down as manager director of the John Lewis Partnership, set out his intention to demand a better deal from Central Government for the region, pointing out that transport spend per head is seven times as much in London as it is in the West Midlands.

The regions and regional cities appear to rank high on Conservative priorities. Earlier, Patrick McLoughlin, chairman of the Conservative Party, stated they would be hiring City Campaign Managers, to help them win in regional cities, traditional Labour Party heartlands.

The Liberal Democrat candidate is Beverley Nielsen, a former regional director of the CBI who has been a director of Birmingham City University for the pasty decade.

Paul Faulkner (pictured), chief executive of Greater Birmingham Chambers of Commerce, said: "We are pleased to see the region and the WMCA Mayor elections taking centre stage at the Conservative Party Conference.

“With an economy worth £80m of GVA and four million people calling it home, the West Midlands should be front of mind for the Government. We are already a mighty region, with extraordinary growth potential.

"With the competition now launched in earnest, we look forward to engaging all of the candidates in what is set to be an important and high profile debate. We announced on Friday that we will be working in partnership with the Coventry & Warwickshire and Black Country Chambers of Commerce to deliver a comprehensive range of mayoral elections activity and look forward to delivering this,  and championing the needs of businesses, in the coming months."

Just ahead of the conference, Theresa May confirmed that Article 50 of the Lisbon Treaty would be enacted by the end of March 2017.

The Prime Minister also declared her intention to introduce a "Great Repeal Bill" in the next Queen's speech. This legislation would remove the European Communities Act 1972 from the statute book as soon as Brexit negotiations were concluded. The Act means that EU law can override UK law when there is a contradiction.

Mr Faulkner added: “We welcome this new clarity on some of the big questions about Brexit but there's no denying more answers will be needed.

“It does mean, however, that the Treaty will be enacted before the French and German elections have concluded. The outcomes of those elections could have a significant impact on the dynamic of the negotiations.

“We also know that the Government remains resolute in its intention to secure full sovereignty for the UK over immigration and legal jurisdiction but also try and negotiate access to the single market and free trade in goods and services. Given what we know about previous EU deals, this will be a tall order.

“The Government has already confirmed that funding will be protected for EU-backed projects agreed ahead of the Autumn Statement and agricultural funding up to 2020 but we need more clarity. In particular, we need the UK Government to guarantee that it will replicate or better the significant sums of funding currently allocated to UK regions by the EU post-Brexit."