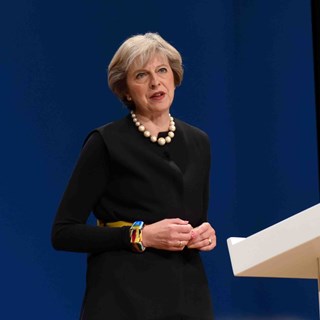 Birmingham and the West Midlands are “finally getting their long overdue moment in the spotlight”, business leaders in the region claimed today.

At the event, the Prime Minister underlined her commitment to powering up regional economies when she said: “If we want to build an economy that works for everyone, then we have to empower our great cities”.

Mrs May (pictured) re-stated the government’s commitment to HS2 and added: “I am delighted that Birmingham is using HS2 as a catalyst for the regeneration of the Curzon Street area.”

Mrs May praised Andy Street for his work as chair of the GBSLEP and described him as an “exemplary candidate” for elected mayor.

She added: “People have always been Birmingham’s strength and the election of a mayor will make sure that this economic region works for everyone.”

Mr Faulkner said: “Birmingham and the West Midlands are finally getting their long overdue moment in the spotlight at this Conservative Party Conference.

“The announcement by Chris Grayling (Secretary of State for Transport) that Midlands Connect will receive £12m in Government funding to develop their work will be welcomed by many. We’ve often said that business doesn’t stop at local authority boundaries and being able to move goods and people quickly and efficiently around the region is a vital component of improving growth and productivity.

“Naturally, it is reassuring to see this clear commitment to the region from Government. We hope to see this translate into further announcements concerning funding and devolution in the Autumn Statement.

“We were also pleased to hear the Prime Minister restate her commitment to HS2. Birmingham is already benefitting from the expected investment in HS2 and this renewed commitment is reassuring.

“What we need to see now is clear messaging from Government on the whole HS2 route, not just the phase 1 London to Birmingham leg. While greater connectivity to London will bring great benefits, the real prize is for our city-region to sit at the heart of a national network connecting 8 out of 10 of Britain’s largest cities.”

All of the Midlands big guns were present at the fringe meeting. Sir John Peace, chairman of the Midlands Engine, said: “The Midlands as a whole is on a roll at the start of a golden decade for the region.”

Steve Hollis, acting chair of the GBSLEP, praised the region for its leading economic position in the country and for its export record and added:

“There is much to do on the skills front and we need to work across the Midlands to give us the strength that will make us the unbeatable region.”

John Clancy, leader of Birmingham City Council, referring to Birmingham’s bid to stage the 2016 Commonwealth Games, said: “The Games would have a huge economic impact on the city and with HS2 due to be up and running by then, 2026 could be the year of Birmingham.”

Councillor Ian Ward, deputy leader of Birmingham City Council, pledged that Birmingham’s costs would be lower than any other bidding city because much of the infrastructure required was already in place.

He added: “The next move is to form a committee to spearhead the bid and we need the people to back it. We need to big up Birmingham and get passionate and even brash.”

Bob Sleigh, who chairs West Midlands Combined Authority, said that there had already been a great deal or work in bringing together the region’s cities and Chambers of Commerce.