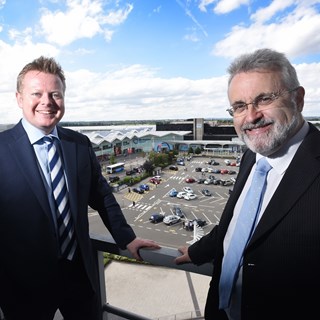 Paul Kehoe is taking over today as Birmingham Chamber president, with a three-point pledge for his two-year term.

Mr Kehoe said: “My theme is going to be geography, scale and our place in the world. I took that decision when I was interviewed for the position three years ago and it seems to have been quite prophetic given what has happened with Brexit, the Combined Authority and Midlands Engine.

“We now have a very different role in the world outside Europe. If you look on a world map you may get four UK cities – London, Edinburgh and Belfast, and possibly Birmingham.

“So we have to look at the best asset we in the Midlands have to sell to the world and that is name Birmingham.

“That does not mean that Coventry, Wolverhampton or Dudley, or wherever, are less important than Birmingham but we need to understand that because what people buy on a world stage is a place.

“What would be really good would be to get people from around the world saying how good we are and stating the Birmingham city region is the place to do business. And getting the city’s name out there is even more important post-Brexit.

“It’s increasingly important connecting ourselves to the world. For me, it’s not just about the airport, it’s about connectivity and promoting Birmingham as the great place to do business.

“The bigger the conglomeration the greater the success is likely to be. But there is now a great opportunity for Birmingham, Coventry and the Black Country Chambers to work together.

“We now have an even stronger common purpose with the Black Country and Coventry and Warwickshire Chambers with the West Midlands Combined Authority now in place together.”

Mr Kehoe also paid tribute to Greg Lowson for the “outstanding success” of his two years in office.

“Greg’s two years have been full of achievement and enthusiasm for the Chamber and one of his outstanding successes has been the creation of CSR City (Corporate Social Responsibility City), which has forged closer links between business and the education sector to work towards ensuring we are training people with the right skills.”

Paul Faulkner, Greater Birmingham Chambers of Commerce chief executive, said: “We are extremely grateful for Greg’s unstinting support for the Chamber, which he has undertaken with great commitment alongside a very busy job.

“We are lucky that he has agreed to remain on the board so we have not lost his knowledge and experience. We are also lucky in attracting a man of the calibre of Paul Kehoe, already an important figure in the fortunes of the Midlands.

“I’m delighted to welcome him on board as the new president of the Chamber. He is a true champion of business in the region and I have no doubt that his drive, enthusiasm, wide knowledge and experience will see him continue the long-standing tradition of absolute first rate leadership at the helm of the Chamber, and build on the great work done by Greg Lowson over the past two years.

“I’ve had the pleasure of knowing Paul and working with him for a number of years through his position as chief executive of Birmingham Airport, as well as a trustee of the Lord Mayor’s charity and more recently on the Chamber board, where he has been extremely positive and supportive of our continual drive to evolve the Chamber and strive for excellence in all that we do.

“Paul is a regional business leader with a global perspective, and as such is perfectly positioned to take on the president’s role at the Chamber at this moment in time.”

Vice-chancellor and principal Prof Ray Linforth said: “As a patron of Greater Birmingham Chambers of Commerce, UCB is delighted to be hosting the annual general meeting.

“The university works closely with industry on employee training and our courses ensure students have the skills required in the modern workplace. It is fitting that the AGM is being held at McIntyre House, which opened two years ago as a dedicated centre for undergraduate and postgraduate study in the heart of Birmingham.

“We are pleased to be welcoming GBCC to the university for such an important event in its calendar and we look forward to showcasing the talents of our trainee chefs and hospitality students in The Brasserie restaurant.”

UCBs’ five schools are committed to the ethos of vocational training, from courses in digital marketing and aviation management to tourism and food development.

All academic programmes are developed with input from employers and industry experts. Teaching, group work and individual study emphasises the application of academic theory to real-life industry challenges. Entrepreneurial approaches are encouraged.