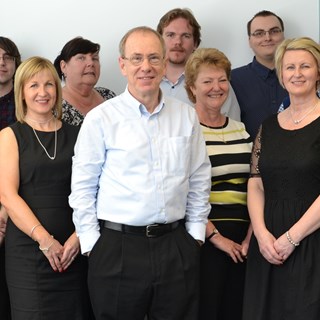 A life-saving Birmingham organisation – born out of NHS cuts during its last re-organisation – has been recognised in the Queen’s Awards for Enterprise for its excellence in innovation.

The Perinatal Institute, members of Greater Birmingham Chambers of Commerce, was founded by Professor Jason Gardosi (pictured) in 2013 and has received the coveted award for developing a safer method of monitoring the growth of babies during pregnancy.

A not-for-profit organisation engaged in supporting NHS maternity services in the provision of safe and high quality maternity care, the institute won consecutive national Patient Safety Awards in 2013, 2014 and 2015 for reducing stillbirth rates in England.

“This is a welcome recognition of the efforts of many hard working and forward looking midwives and doctors who are seeking to provide a personalised and, hence, safer service for expectant mothers in their care,” said Professor Gardosi.

Such recognition, he added, would help to highlight the need for commissioners and providers of the health service to maintain a focus on prevention and for continued enhancements in the quality of maternity care.

The institute’s award-winning innovation relates to the Gestation Related Optimal Weight (GROW) chart which predicts a baby’s growth in the womb, after adjusting for pregnancy characteristics such as the mother’s height, weight and ethnic origin. Previously, a one-size fits all approach resulted in over three quarters of babies at risk due to growth problems not being recognised.

The computer-generated GROW app increases the confidence of clinicians when monitoring the growth of a baby during pregnancy – meaning they can intervene more quickly when there is concern, or can more confidently provide reassurance to the expectant mother when growth is progressing normally.

The GROW charts are provided by the institute as part of a national programme focusing on the prevention of stillbirths, by implementing lessons learnt from thorough, independent assessments of adverse pregnancy outcomes.

Pictured is Professor Gardosi and his team