Deal signed to convert Metro trams to run on batteries 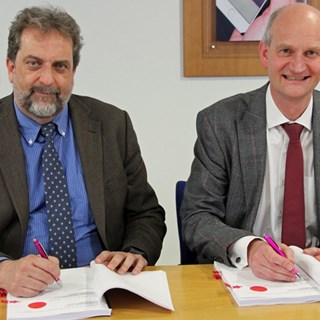 Cutting-edge battery technology is to be fitted to Midland Metro trams Centro, the West Midlands public transport delivery body, put pen to paper with Spanish tram manufacture CAF to start work on fitting them to the Metro fleet.

The battery equipment will enable the CAF-manufactured Urbos 3 trams to operate without the need for overhead line equipment to power them - the first tram fleet in the UK to do so.

The technology will allow the trams to run overhead line-free through architecturally sensitive areas or where expensive building works would be needed to install overhead power lines.

The 21 tram fleet is scheduled to be ready for when the extension from Birmingham New Street station to Centenary Square is opened in 2019.

The deal was signed by James Aspinall, managing director of Centro and Antonio Campos Irujo, Western Europe director for CAF.

Mr Aspinall said: "This is an exciting new development for the Midland Metro as it will be the first tram fleet in the country to operate in this way. By upgrading these vehicles we are cementing the role of tram as an important means of public transport for the region."

Mr Campos Irujo said: "I am delighted to be signing this contract on behalf of CAF. There are only a handful of cities in the world and none in the UK that operates catenary-free running, and in doing so the Midland Metro joins an exclusive club."

The lithium ion batteries will be fitted on the tram roof and be recharged by overhead lines along other parts of the route.

The first tram to be converted will be sent to CAF's manufacturing plant in Zaragoza in Spain.

Once this has been successfully completed and tested the remainder of the conversion work will be done at the Metro depot at Wednesbury, in Sandwell. The cost of the scheme is commercially sensitive however a £3.15m contribution will be made by the Greater Birmingham and Solihull Local Enterprise Partnership and £1m will come from industry association UKTram.

The Metro fleet was originally ordered by Centro - the delivery arm of the West Midlands Integrated Transport Authority (ITA) - in 2012.

The ITA envisaged them being able to run without overhead wires along certain sections of the network but battery technology was not sufficiently developed for it to happen until now.

While Urbos 3 trams already run catenary-free on parts of the tram networks in Zaragoza, Seville and Cadiz in Spain they use supercapacitors to provide on-board energy storage. However these would be unsuitable for trams negotiating the steep hills heading to Centenary Square from New Street station via Pinfold Street and into Victoria Square.

Overhead lines and equipment would have been needed, marring the architecturally sensitive environment of Victoria Square.

Sections identified in future network extensions for catenary-free running are:

The whole of the Birmingham Centenary Square extension, including through Victoria Square, where the Town Hall and Council House are situated

The Birmingham-Edgbaston extension from Centenary Square to the Brindleyplace tram stop, and through the underpass at Five Ways

The proposed Wednesbury to Brierley Hill extension is also being evaluated to identify catenary-free sections.