Mobile phone technology is helping to save lives 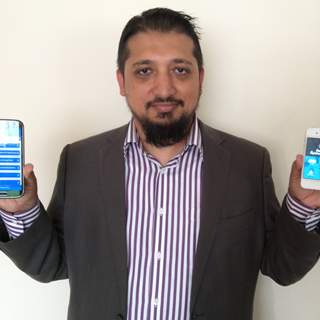 A tiny Birmingham company is at the cutting edge of new mobile technology which could transform or even save hospital patients’ lives.

The brains behind the venture is Ammar Khalid (pictured), director of the firm,  whose work developing state of the art technology could prove vital for patients facing surgery for head, neck, face and jaw injuries.

The Birmingham-based IT specialist has devised an app called the OMFS (Oral Maxillofacial Surgery) Handbook in partnership with doctors. The smartphone device aims to help and guide junior doctors undertaking OMF surgery, saving time and reducing the risk of error in referral procedure.

The device is now in use at John Radcliffe Hospital in Oxford and Ammar has high hopes of introducing it into other hospitals in the UK.

“This is an innovation which we believe will save time and costs for the NHS and potentially transform, or even save, people’s lives. It has already had a very positive response in Oxford and we would like to extend it into other hospitals in the UK.”

Ammar has also worked with haemotology staff at Heartlands Hospital on a similar app in an attempt to reduce wrong referrals to their ward from other doctors, again saving time and costs.

“We think that the time is ripe for businesses from all disciplines to ‘appify’ their businesses, resulting in major business process efficiencies, improvements and cost-savings.

“We believe we are at the cutting edge of stuff which could transform people’s lives. And it is about time we got the word out.”

Ammar, from Pakistan, who has previously worked as an IT contractor/consultant, runs Centric Web Solutions with his wife Sabah, while his brother Usman runs a separate Centric operation from Dubai.