Inflation: Chamber urges Government to ‘get house in order’ 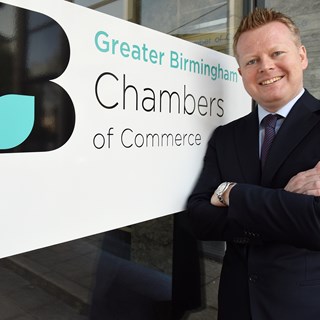 Business leaders in Greater Birmingham have urged the Government to use a period of relative calm to “get their house in order” after inflation remained unchanged at 0.6 per cent.

While the latest Consumer Prices Index (CPI) rose by 0.6 per cent in the year to August 2016, there was no increase from July.

The Office for National Statistics (ONS) said cheaper hotels, summer clothes and alcohol offset rises in food, air fares and smaller reductions in the cost of fuel than in August 2015.

Manufacturers were hit by a slight increase in the cost of goods, with the Producer Price Index (PPI) estimating a 0.2 per cent rise from July.

GBCC chief executive Paul Faulkner (pictured) said the period of calm offers the Government an opportunity to deliver clarity on major infrastructure projects, its industrial strategy and the long-term rights of EU workers.

“Increases in the CPI Index remained relatively low in August meaning that consumers have yet to feel a major impact from the fall in the value of pound sterling on the prices of imported goods,” he said.

“By contrast, the Producer Price Index revealed that the price of materials imported by manufacturers rose significantly on the year to August.

“We will be waiting to see whether these additional pressures eventually lead to increases in prices for consumers in coming months.

“While input prices for manufacturers are up significantly in the year to August, they only saw a slight rise compared to July as the pound has begun to settle into a ‘new normal’.

“We would urge the Government to make use of this period of relative calm before the activation of Article 50 to ‘put their house in order’ by renewing their commitment to major infrastructure projects, setting out the proposed industrial strategy for the UK and providing certainty for UK businesses on the long term residence rights of existing EU workers.”

The report will be launched at an event on 11 October and will provide meaningful insight into how the local business community is faring post-referendum.

The Chamber is also holding a member-only briefing session with the Bank of England on 7 October.
Details on both events are available on the GBCC website.