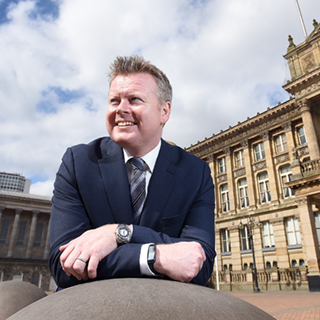 A Birmingham bid to host the Commonwealth Games in 2022 has today been endorsed by the Birmingham Commonwealth Games Bid Company – on the same day the UK Government has said it was ready to work with cities interested in hosting the Games.
It also received the support of the city’s business community and Paul Faulkner (pictured), chief executive of Greater Birmingham Chambers of Commerce (GFBCC), said: “The business community in Greater Birmingham fully supports this initiative.

“The city had originally been preparing to bid for the 2026 Games but plans were brought forward following the news that Durban would no longer be staging the 2022 Games as planned in South Africa.
“The business community will be keen to help meet the challenges of this earlier bid, which will present a huge range of opportunities for all businesses. The bid itself will bring a focus on Birmingham at a time when it is driving its importance on the global stage.

Mr Faulkner is also Chairman of Sport Birmingham and a Director of the Birmingham Commonwealth Games Bid Company.

At a meeting today the Birmingham bid company reviewed a feasibility study produced by consultants Origin and decided it would be in the best interests of Birmingham and the wider region to put forward a proposal to stage the event, last held in England in 2002.

Details of the Birmingham feasibility study remain confidential at this stage while the report is taken through the cross-party political and democratic processes of the city council.
The study will then form part of a public report to the council Cabinet in the coming weeks, at which point everyone with an interest in the proposed bid will be able to analyse its merits.
It is understood the merits of formal proposals from across the UK will be considered before the selection of a candidate bid to compete against rivals from other Commonwealth nations for the honour of staging the games.

“Given today’s announcement that the Government want to hear from cities interested in hosting the 2022 Games, we are making it clear we have an interest in being considered for the privilege.
“The feasibility study, if endorsed by the city council as hoped, puts us in prime position to do just that.”