Slovakia is the ‘new European hub of automotive’ 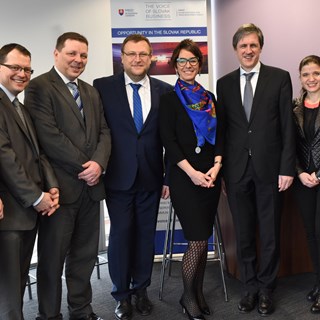 As Britain begins negotiating its exit from the EU, local automotive businesses should explore opportunities for growth in Slovakia, the ‘new European hub of automotive’.

That was the message at a recent roadshow organised by The Voice of Slovak Business and held at the Birmingham offices of business and finance adviser Grant Thornton.

Automotive supply chain companies from across the West Midlands attended the inaugural event and were welcomed by Lubomir Rehak, ambassador of the Slovak Republic to the UK, who highlighted his country’s political stability, transparent economic rules, predictable legal environment and stable currency.

With annual production topping one million vehicles and forecast to grow to 1.35m by 2020, Slovakia has developed rapidly into one of the world’s leading car producers, experiencing a five-fold production increase in the last ten years.

The country is home to Volkswagen Group, PSA Group and Kia Motors, with Jaguar Land Rover’s new 300,000m2 manufacturing facility due for completion in 2018.

Christopher Plant, founder of the Voice of Slovak Business and former CEO of the British Chamber of Commerce in the Slovak Republic, said: “Despite uncertainty surrounding the forthcoming Brexit negotiations, successful UK automotive businesses are actively exploring how to boost their plans for expansion by establishing a subsidiary in Slovakia, right at the heart of the EU.

“The numbers speak for themselves. Slovakia is rapidly becoming known as the new European hub of automotive and with further headroom for growth there are tremendous opportunities.

“Following the successful bid for JLR by the Slovak Government, it’s clear that JLR’s suppliers would want to continue those relationships in Slovakia and we’re here to help facilitate an easy landing for them.

“Expanding their global footprint also has the potential to benefit these businesses’ parent operations in the UK, enhancing job creation and further growth.

“I do believe, however, that waiting to see what Brexit might mean would be unwise, as many are looking with great interest at Slovakia.”

David Hillan, practice leader at Grant Thornton in Birmingham, added: “Working alongside our automotive sector team and Grant Thornton Slovakia, we know the country has a lot to offer ambitious automotive businesses, such as generous investment incentives and valuable tax credits for R&D and on-the-job training initiatives.

“We also know that compared to many territories in mainland Europe, it’s a very easy country to expand into and do business in, with minimal red tape and a well-trained and committed workforce.”