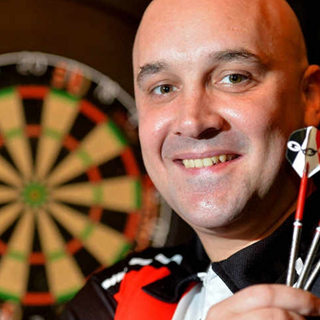 The partnership was launched at Narrow Aisle’s head office facility at Great Bridge, Tipton, where Jamie - who was born in Tipton and still lives in the town – was introduced to the company’s production and administrative staff along with members of Narrow Aisle’s management team.

Darts enthusiasts will be able to spot Narrow Aisle’s logo on Jamie’s shirt at future tournaments and Jamie will also serve as a Narrow Aisle ambassador, making personal appearances on behalf of the company at major trade events.

Jamie (pictured)commented: “I am delighted to have the backing of such a well-respected company as Narrow Aisle, which is one of the leading names in warehouse intralogistics across the world. Darts has become a global sport in recent years so this really is the perfect partnership.”

Narrow Aisle’s managing director, John Maguire, said: “Darts has seen a huge surge in popularity in recent years and televised events are now watched by many millions of people globally. We are very happy to be associated with Jamie and wish him every success for the coming year.”

Narrow Aisle manufactures the Flexi range of articulated warehouse trucks. They are designed and built at Flexi Narrow Aisle’s production facility in Great Bridge, and are distributed to more than 60 countries worldwide, where they help customers save at least 30 per cent more space in their operations.