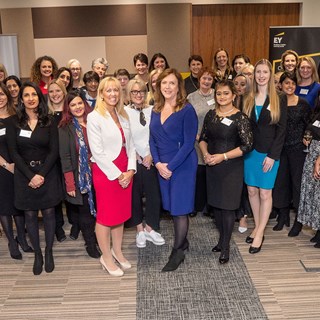 Nearly 40 of the region’s leading female business owners gathered at the event held at EY’s Birmingham office in 1 Colmore Square.

Guests heard from Jenny about her career with RBS and what inspired her to take on the challenge of buying and running her own business.

Speaking at the event, Jenny said: “It’s wonderful to see so many women gathered together to celebrate the success of a network that was launched to provide support and inspire female entrepreneurs in the Midlands.

“It was great to be able to share my story and some of the challenges I’ve overcome as an entrepreneur, but also hear from those attending the event about what drives and inspires them. I wish the network all the very best in the future, as it continues to grow and attract more women to join.”

Jenny rose through the ranks at RBS in a 32-year banking career, which began at the age of 16 as a cash-counter and cash filler at NatWest.

Senior roles in sales, operations, change and risk management were followed by an appointment to head of operations at Hanco ATM Systems, a subsidiary of RBS that would become Your Cash. In 2010, Jenny led an MBO to purchase Your Cash, spending the next six years building the business before selling it in 2016.

Since then, Jenny has featured in two series of the hit investment show Dragons Den, investing in several businesses during her time on the panel.

As well as hearing about Jenny’s career, guests at the event were able to network with likeminded business owners, sharing stories and experiences of the challenges and opportunities they face in the current economic and business climate.

“We’re incredibly pleased to have welcomed Jenny as our special guest for the evening. Her story is inspiring, and I’d like to thank her for her efforts in attending and helping us to celebrate our first successful year in operation.”

“I’m really passionate about driving engagement for female entrepreneurs in the region. The opportunity to set-up a Female Entrepreneurs’ Network in the Midlands, following the success of the initiative in London, was one that I felt very strongly about.

“Last year the Federation of Small Business reported that women-owned and led businesses contributed £221 billion to the UK economy, yet there’s still a gender bias when it comes to female entrepreneurs having access to funding and support for growth.

“This is supported by The Alison Rose Review of Female Entrepreneurship which found that less than one per cent of all venture funding goes to businesses founded by women, inhibiting scale up of their businesses. Access to finance, lack of support for family care and availability of mentoring support were all being cited as barriers.

“The Midlands is a growing hub for female entrepreneurship, particularly within the Private Middle Market and EY’s Female Entrepreneurs’ Network aims to support all those who want to share experiences and offer advice to others.”

For further information on how to get involved in the network, contact Lisa Grier. Email: lfgrier@uk.ey.com