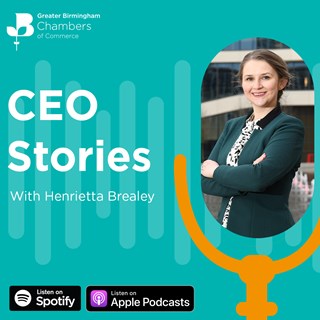 Rachel Roberts, the CEO and founder of PR agency spottydog communications, is the guest on episode nine of the Greater Birmingham Chambers of Commerce's CEO Stories podcast, which is released today.

The episode is available to listen to now on all major listening apps such as Apple Podcasts and Spotify.

Rachel is passionate about her business being the “best in breed”.

In this episode, she tells Henrietta Brealey about transitioning from a career in the army to become a successful PR practitioner – which led her to founding the multi award-winning spottydog communications.

A firm believer in demonstrating the value of strong public relations, Rachel also bangs the drum for her profession as the 2022 president of the Chartered Institute for Public Relations (CIPR).

We also hear her thoughts on the future of the PR industry, developing mental resilience and striving to create an inclusive workforce based on her own experiences as a member of the LGBTQ+ community.

CEO Stories is hosted by Henrietta Brealey, who last year became the youngest chief executive in the Chamber’s history.

Throughout the series, Henrietta is joined by a variety of well-known and emerging business leaders, who will reveal what makes them tick, who inspired them and the advice they would give to aspiring CEOs.

A new episode is published on the first Monday of every month.

You can listen and subscribe to CEO Stories now on the following listening platforms: